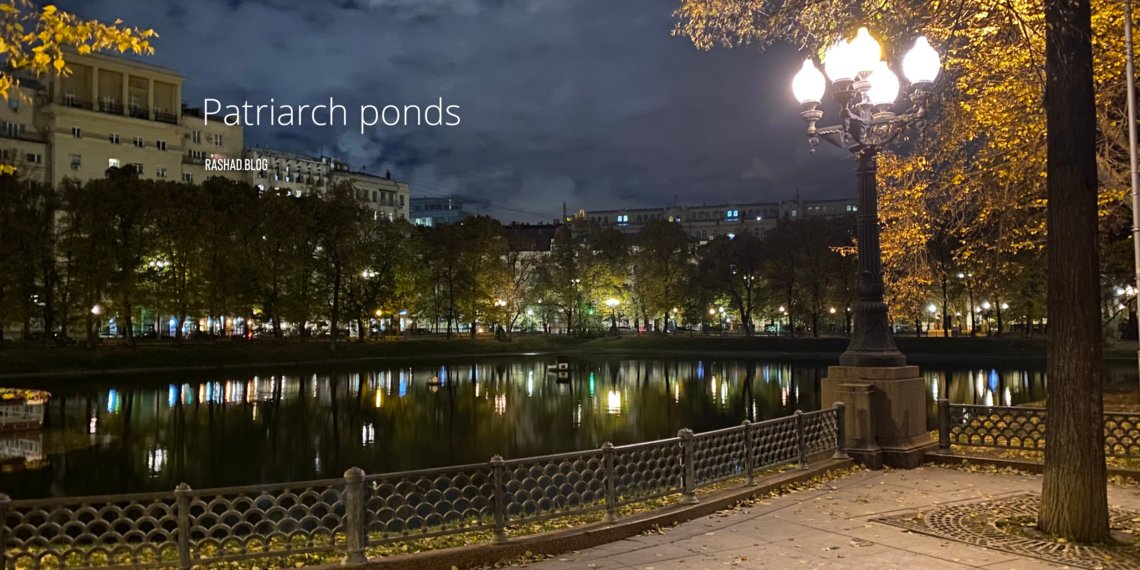 It is the 4th of October, Moscow. Finished my meeting and decided to have a long walk. With music in my ears and gentle cold wind blowing in my face, I began feeling at peace after a really long time. I felt tranquil & grateful. Enjoyed the walk profoundly & amidst the city lights decided to self-express again, in my own way. It’s been a while now, since I last wrote.

Before I go on with the topic in mind for this piece, let me describe the “war time” Moscow. Although, the Russian government does not call it “War”, they are naming it military operation. Life in Moscow seems – as if nothing is happening. No protests, no military personnel, almost nothing is disrupted by so called “military operation” – apart from supply chain of certain goods. McDonalds and Starbucks have been renamed. The big 10 Consulting firms still operating under different brands. Netflix is being accessed via VPN. The only discomfort for me is, my bank cards not being operational, but I am glad I have brought some cash with me. Other than that – all major retail brands are still here. Grocery store shelves are pretty much the same as before. People are moving on with their daily lives, only selected few have really left Russia for good. In the meantime, hotels in Azerbaijan, Baku are full with Russian deserters and thousands are dying from both sides along regions of Ukraine. Now that I am done with my coverage of updates from Moscow, I can move along to my topic in mind.

All my meetings have included some bits and pieces of war stories & all of them were terrifying. It is very hard to acknowledge the fact that after this military operation or war – the world will never be the same. Due to the fact that the scale of economic changes is huge & its geographic impact is big enough to impact dozens of countries & nations.

My last meeting today was with a 54-year-old gentleman over dinner.  Weirdly, we had our meeting in a Turkish restaurant. Still having an acid reflux after that meal. For that reason, I decided to have a long walk towards Patriarch ponds park. Over dinner, we discussed our perspectives and views on differences of our generations – which became an inspiration for this exact article.

The conversation began by discussing his 23 year old son & 27 year old nephew. He was expressing his feelings of trouble for, their generation have very different views on life in general compared to his. “Our generation powered through any challenge, we kept personal matters private & we fought hard for what we have today. However, they are easier going, they are in pursuit of comfort and peace. Also, they can quit on anything at any given point if it lacks enjoyment, even if it is temporary.”  At one point he stated, his nephew grew up studying in UK. After moving back to Baku, his family observed that he (the nephew) had developed different views, aspirations, motivations, which was contradicting to theirs. His dad & uncle are regretful about him living such a long time abroad because he changed so much. They do not take a shine to his dissimilarities. They think, he is incompatible with “their ways” of doing things & living in general.

This whole bit, made me so curious & wonder. Why are we so afraid of change, of unknown, of something different & outliers in general? Change is the only constant, it can lead to something astonishing as well as something dreadful. However, being always the same & not being eager to change will almost always have terrible results. If we are talking about people of course. To change, to adapt and to evolve is in our DNA.

I started to vocalize my argument for the discussion with a theory. Which is called Allegory of the cave by philosopher Plato. This theory was introduced to me by my friend Fuad years ago. He always finds ways to contribute to my writing or my personal growth. Kudos to him!

What Is an Allegory?

The word ‘allegory’ comes from the Latin ‘allegoria,’ meaning speaking to imply something else. An allegory represents a larger point about society or human nature through a simple story, in which different characters may represent real-life figures. Sometimes, situations in the story may echo stories from history or modern-day life without ever explicitly stating this connection.

Allegories are similar to metaphors in that both illustrate an idea by making a comparison to something else. However, allegories are complete stories with characters, while metaphors are brief figures of speech.

What Is The Allegory of the Cave?

The Allegory of the Cave is a Socratic dialogue recorded by Greek philosopher Plato. Plato was a student of Socrates, and one of the few people to write down some of his many teachings, which were eventually compiled into their own books. The Republic is one such book, containing The Allegory of the Cave, a dialogue between Socrates and Plato’s brother Glaucon. As presented by Plato, Socrates’s allegory of the cave imagines a group of people chained together inside an underground cave as prisoners. Behind the prisoners there is a fire, and between the prisoners and the fire are moving puppets and real objects on a raised walkway with a low wall. However, the prisoners are unable to see anything behind them, as they have been chained and stuck looking in one direction—at the cave wall—their whole lives.

As they look at the wall before them, they believe the shadows of objects cast by the moving figures are real things—and the only things. Their visible world is their whole world. The narrative goes on to ponder about what would happen if one of the prisoners were forced to leave. What would they see? How would they adjust? Would they believe what they saw outside? What would happen to them if they returned to the cave? Would they be able to see the same things they saw before? The narrative assumes the freed prisoner would return and try to liberate their fellow prisoners, now knowing how much more of the world exists outside the cave. However, in its conclusion, Socrates and Glaucon agree that the other prisoners would likely kill those who try to free them, as they would not want to leave the safety and comfort of their known world.

What Does The Allegory of the Cave Mean?

Plato uses the cave as a symbolic representation of how human beings live in the world, contrasting reality versus our interpretation of it. These two ideas reflect the two worlds in the story: the world inside the cave, and the world outside. For the prisoners in the cave, the shadows on the wall created by firelight are all they know to be real. If one of the prisoners breaks free and witnesses the outside world, they will come to understand that as the true reality. However, when the freed prisoner returns to the darkness of the cave, their eyes will have now been blinded by the light of the sun, and their fellow prisoners still inside the cave will believe that it is the outside world that is harmful; to them, that truth is not worth seeking.

The allegory delves into the philosophical thought of truth, and how those with different experiences or backgrounds may perceive it. The shadows on the wall of the cave are constantly changing, so there is no stability or consistency offered for those who bear witness to them—only a false reality. They have no knowledge that the real world exists outside of their dark cave, or even that there is a real world other than their own. Meanwhile, the person who has left the cave will not be able to exist as they once did. In fact, they may even come to pity or feel superior to those who remain in the cave. The allegory essentially demonstrates the conflicts between knowledge and belief and what happens to a person once they’ve been enlightened. It is an examination on the nature of humanity, and fear of the unknown. (source: masterclass.com)

After my brief explanation of the cave theory, my conversationist gave me a smile & a nod of approval. After which, I kept going. I told him that my father thinks the same, he doesn’t like my differences & the change I went through due to my exposure to UK, USA & the western world in general. In fact, deep down he is somehow regretting sending me off to UK to study. I decided to continue my speech while he was eating and listening carefully.

I decided to unfold another story for him. “Funny thing about me, back in January when I was driving by Nago-Torbole, Italy & chatting with my friends Orkhan & Chingiz on the phone. We decided to launch a podcast platform.

Almost 9 months later we finished recording our 1st pilot season, the show is called Algorithm and on one of the episodes, Chingiz and I were interviewing Ilham Hajiyev. Ilham is a headhunter, a writer, traveler, yoga enthusiast & an advocate for healthy living.

The show started with his travel stories. He told us his story about how he began traveling. He was sipping coffee in the morning in his apartment in Narimanov district & he decided to move to Italy for a year. He grew up on movies of Adriano Celentano & had a soft spot for Italy. He ended up living in Italy for a full year & spent another 3 years in Paris. Moreover, he has visited 76 countries to this day.

I asked Ilham, on camera, the following question. Having visited so many countries up until today, what did that give you – what did you gain? To which Ilham gave a long and descriptive answer. (I urge you to listen to that show, Algorithm podcast is launching a new episode every Wednesday) However, the short answer is – He found his own way of BEING. What is more beautiful than that? Finding your own truth & way of life. It is far better than a life lived for others, lived to fulfill expectations or a life full of regrets. To this story, my companion gave another affirmative smile.

To sum up, I quoted one of my favorite quotes.

“Every man has two lives, and the second starts when he realizes he has just one”

Eckart Tolle – The Power of Now

You are not designed to be happy

Hunter S. Thompson’s Letter on Finding Your Purpose and Living a Meaningful Life

Hunter S. Thompson’s Letter on Finding Your Purpose and Living a Meaningful Life 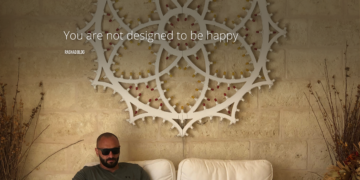 You are not designed to be happy 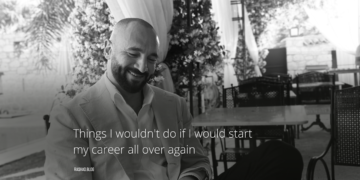 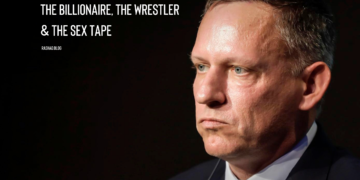 The Billionaire, The Wrestler & The Sex Tape